There probably hasn’t been a time in recent American history when the role of the media was more important than now. The Trump administration is drowning in scandal, the country is calcified into two partisan halves. And large newsrooms are faced with a choice: to maintain an independent voice, but one as aggressive and unblinking as the days of Watergate. Or to morph into something more partisan, spraying ammunition at every favorite target and openly delighting in the chaos.

If I think back to one subject I’ve harped on the most as public editor over the last year, this is probably it. Digital disruption and collapsing business models get all the attention, but the prospect of major media losing its independence, and its influence, ranks equally high among the industry’s perils. Derision may feel more satisfying, but in the long run stories that are measured in tone are more powerful. Whether journalists realize it or not, with impartiality comes authority — and right now it’s in short supply.

Mike Morell, former acting director of the C.I.A. and a backer of Hillary Clinton, earlier this week likened the U.S. media’s reaction to Donald Trump to the Venezuelan media’s reaction when Hugo Chávez became president nearly 20 years ago. With little political opposition to Chávez, the media assumed that role, Morrell said, and ultimately lost its credibility with the Venezuelan people.

The U.S. isn’t Venezuela but the media here shouldn’t fall into the same trap. I don’t worry that The Times, or The Washington Post or others with the most resources will fail to pursue ripe investigative targets. And I hope they do. But in their effort to hold Trump accountable, will they play their hands wisely and fairly? Or will they make reckless decisions and draw premature conclusions?

And who will be watching, on this subject or anything else, if they don’t acquit themselves well? At The Times, it won’t be the public editor. As announced on Wednesday, that position is being eliminated, making this my last column. Media pundits and many readers this week were questioning the decision to end this role, fearing that without it, no one will have the authority, insider perspective or ability to demand answers from top Times editors. There’s truth in that. But it overlooks a larger issue.

It’s not really about how many critics there are, or where they’re positioned, or what Times editor can be rounded up to produce answers. It’s about having an institution that is willing to seriously listen to that criticism, willing to doubt its impulses and challenge the wisdom of the inner sanctum. Having the role was a sign of institutional integrity, and losing it sends an ambiguous signal: Is the leadership growing weary of such advice or simply searching for a new model? We’ll find out soon enough.

I leave this job plenty aware that I have opinions — especially about partisan journalism — that don’t always go over well with some of the media critics in New York and Washington. I’m not prone to worry much about stepping in line with conventional thinking. I try to hold an independent voice, to not cave to outside — or inside — pressure, and to say what I think, hopefully backed by an argument and at least a few facts. In this job, I started to know which columns would land like a grenade, and I’m glad to have stirred things up. I’ll wear it like a badge.

Thanks to the many editors and reporters inside the building who took my questions and answered them fairly and professionally. Thanks to my dedicated and wise assistant, Evan Gershkovich, whom I am grateful to have had by my side. Thanks to Eric Nagourney, my copy editor, who saved me many times from fumbling over my own words.

And thanks most of all to the thousands of readers who kept their concerns coming and kept me on my toes.

Time to rip off the Kevlar and turn out the lights.

Liz Spayd is the sixth public editor appointed by The New York Times. She evaluates journalistic integrity and examines both the quality of the journalism and the standards being applied across the newsroom. She writes a regular column expressing her views. The public editor works outside of the reporting and editing structure of the newsroom and receives and answers questions or comments from readers and the public, principally about news and other coverage in The Times.
Her opinions and conclusions are her own. 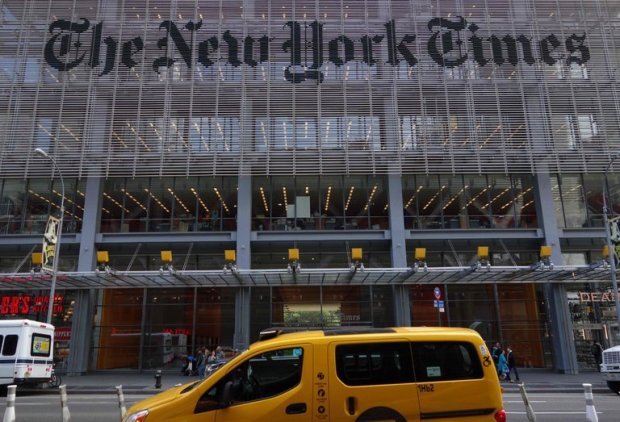 The New York Times offered buyouts to its newsroom employees on Wednesday, aiming to reduce layers of editing and requiring more of the editors who remain.

In a memo to the newsroom, Dean Baquet, the executive editor, and Joseph Kahn, the managing editor, said the current system of copy editors and “backfielders” who assign and shape articles would be replaced with a single group of editors who would be responsible for all aspects of an article. Another editor would be “looking over their shoulders before publication.”

“Our goal is to significantly shift the balance of editors to reporters at The Times, giving us more on-the-ground journalists developing original work than ever before,” they said in the memo.

In a separate memo, Arthur Sulzberger Jr., the publisher, said the company would be eliminating the position of public editor, which was established to receive reader complaints and question Times journalists on how they make decisions. Liz Spayd, the current public editor, will leave The Times on Friday.

The buyouts are meant primarily for editors, but reporters and others in the newsroom will also be able to apply for them, the memo said. Mr. Baquet and Mr. Kahn said that the savings generated by the reduction in editing layers would be used to hire as many as 100 more journalists.

The Times would turn to layoffs if not enough people volunteer for buyouts, Mr. Baquet and Mr. Kahn said in the memo.

The offer comes as The Times continues its shift from a legacy print operation to a more digitally focused newsroom. Reducing the layers of editing was one of the primary recommendations in an internal study issued in January, the 2020 Report, that was meant to serve as a blueprint for the next phase of that transformation.

A “print hub,” which handles the tasks involved in producing the printed newspaper on a nightly basis, was created in 2015 in an effort to free editors to focus on the digital audience, but the process of shedding longtime habits built around daily print deadlines continues to evolve. As its digital audience has grown, The Times has focused on publishing articles online quickly, placed an emphasis on visual journalism and invested in so-called service journalism with its acquisition in October of the product-review websites The Wirecutter and The Sweethome.

In May, the Times Company reported strong digital growth, including a 19 percent gain in digital advertising revenue.

But those gains were not substantial enough to offset a continuing, industrywide decline in print advertising, historically the main revenue source for newspaper companies. Print advertising at The Times fell 18 percent in the most recent quarter, causing an overall decline in advertising revenue of 7 percent.

The company has increasingly relied on subscription revenue, which spiked amid Americans’ close attention to the presidential election last year and the start of President Trump’s term. The Times registered a net gain of 308,000 digital-only subscriptions in the most recent quarter, the largest number for any quarter in its history. The surge fed an 11 percent increase in circulation revenue.

The public editor position was created in 2003 to rebuild trust among readers after the scandal involving Jayson Blair, a Times reporter who was found to have fabricated sources and plagiarized repeatedly.

Ms. Spayd, who was the sixth person to hold the position, declined to comment when reached late Wednesday but told The Columbia Journalism Review in an email: “The Times is reimagining itself in all sorts of ways, and the decision to eliminate the public editor’s role is just one part of that. I’m honored to have been among the six who’ve sat in this chair, and to be among those who tried to keep a great institution great, even as it made the inevitable stumbles.”

Just a few national news organizations, including NPR and ESPN, still have a public editor or a similar position. The Washington Post eliminated its ombudsman in 2013.

“Our followers on social media and our readers across the internet have come together to collectively serve as a modern watchdog, more vigilant and forceful than one person could ever be,” he wrote. “Our responsibility is to empower all of those watchdogs, and to listen to them, rather than to channel their voice through a single office.”

On Tuesday, The Times announced the creation of the Reader Center, an initiative that appeared to overlap somewhat with the public editor’s role. The center will be responsible for responding directly to readers, explaining coverage decisions and inviting readers to contribute their voices.

As news spread on Wednesday that The Times had offered buyouts targeted at editors, some readers fretted that coverage would suffer. Most articles at The Times go through at least two or three editors before being published.

Rick Edmonds, a media business analyst at the Poynter Institute for Media Studies, a school for journalism in St. Petersburg, Fla., said that copy editors — who, in addition to editing for grammar, spelling and style, check facts, correct faulty logic and make sense of garbled prose — had frequently been targeted in cost-cutting efforts in newsrooms across the country.

“I think there is a level of scrutiny and quality control that’s kind of disappearing,” Mr. Edmonds said.

Grant Glickson, the president of the NewsGuild of New York, the union that represents Times employees, said in a statement that the buyout announcement was “devastating for our members and grave news for the state of journalism.”

“These Guild members don’t simply correct comma splices; they protect the integrity of the brand,” he said. “They are the watchdogs that ensure that the truth is told.”

It is the sixth time since 2008 that the company has offered newsroom buyouts. Some employees were laid off in 2014 when The Times did not receive enough buyout volunteers.

In the midst of those reductions, the newsroom has continued to hire. The Times newsroom has a staff of about 1,300, near its record high.

The staff had anticipated the announcement of buyouts for months, one of several sources of looming uncertainty. Management is negotiating a new contract with the NewsGuild, and the company intends to consolidate staff members on fewer floors in its Midtown Manhattan headquarters so that it can lease out more space. Some employees have been temporarily displaced to another building during construction on new workspaces, which the company has said should be completed by the end of the year.

Correction: May 31, 2017
An earlier version of this article referred incorrectly to an effort to contact Liz Spayd, the public editor. Ms. Spayd was contacted late Wednesday for comment; it is not the case that she did not respond to a request for comment during the day.